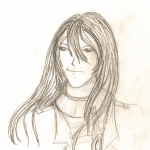 I still don't fully understand how this wiki works, so please point out my mistakes and teach me how to find my way around here.

I'm not the average cartoon watcher. I am a 50 year old mother and/or stepmother of 9 children and grandmother and/or step grandmother of about 7 depending how you count. I have a BS degree in Anthropology and social science, I've studied literature at the graduate level, and I like to draw.

I became interested in Generator Rex in April 2011 when my slightly autistic 12 year old daughter started asking me to draw fan art. I have seen all of most episodes [some several times], though not in order. I find the story very interesting though recently it is becoming a bit random. Looking forward to seeing what happens next. The writers don't seem to try to keep this universe consistent, so I'm expecting something more random rather than a restoration of what we loved before.

My favorite characters are Rex and Van Kleiss.

I like Rex because although he does a good job at displaying stereotypical teen behavior, he also shows a profound respect for every human being even if they have been turned into a monster or are working against him and showing him not mutual respect. I also like that he has so much personal integrity, standing by what he believes is right even when it means standing against his own team. His occasional tendency to still fall pray to laziness and peer pressure, [such as Noah's party suggestion in the grounded episode] and sometimes unwisely disobey orders makes him more believable as a teenager with some integrity. Nobody's perfect.

I like Van Kleiss because he's artistically interesting, as are his minions and his land, and because he is[was?] sort of a vampire. I like to speculate about what it would take to redeem him and who he was before. He is the character which I most easily relate to, even though he is basically evil. I think he only became evil because he was lonely and his evilness makes it impossible for anyone to get close enough to him to heal his lonliness, so he's sort of a tragic character. [Heathcliff...I loved him too. I just love those tragic evil guys I guess] I have empathy for Van Kleiss, but I'm not evil. He doesn't see himself as evil either, though...so who really knows.

Having not started watching until near the end of season two, [I've watched the earlier episodes in a very random way, the first 9 on the DVD and the rest where I could find them online or in reruns] I'm a bit confused about what VK's powers really are, and his connection to Abysus. When I have time I'm gonna go back and do some research and try to figure him out.

I also feel a certain kinship towards Ceasar and Breach, because they are crazy, and am crazy.

Breach is alot like me in the way she thinks. IF she were real, we'd be friends. If she took me to the place where the stillness comes from, I would have understood. Everything and nothing. I don't think she is evil, I think she is just lonely like Van Kleiss and she stays with Van Kleiss because she understands him as no one else can, and really cares about him as a person, not as a tyranical leader. He's probably more of a father figure then a potential lover because she joined him when she was very young and he is much older than her. But EVOs and vampires are ageless, right? when Breach gains the maturity to recognize that potential, I think she would be wise to try to reawaken his humanity through romance. As far from human as he is biologically, he might no longer have the capacity for physical passion, but he still has a human soul. Everyone is redeemable if they choose to be. She might actually be smart enough to convince him to make that choice.

She has the power to create portals from one place [or time] to an other because she has the ability to fully hold two places [or any two contradicting realities] in her mind at once, just as she can hold everything and nothing in her mind at once. I love that this character's EVO skills are so perfectly matched to who she is as a person.

One of the things I like in the show is the grey line it leaves between good and evil. It is true to life in that sense. Evil is not an innate characteristic of any individual but rather like being an EVO: a condition which can be cured.

This show provides many good parables for discussion of moral and ethical values, at the same time as being educationally useful it is also extremely entertaining.

The image to the right is the WIP photos of a shirt I made for my daughter. I chose this image to represent me here, because of all the Rex-related images I have I think this one best symbolizes who I am as a Generator Rex fan.

To me, a story is created as much by the audience as it is by the author or the storyteller. This show is a collaboration between many people...Man of Action "created" it, but it is drawn, written, produced and promoted by many different people on different episodes, and then spun in different directions by audience reactions, discussions, speculations, fan fictions and fan art. It takes on a life of it's own, like Ceasar's wayward children. I think this child is growing in a good directions. I am honored to have played my own small part in it's life.

Retrieved from "https://generatorrex.fandom.com/wiki/User:Jadisofeternity?oldid=34946"
Community content is available under CC-BY-SA unless otherwise noted.